Most people struggle with forgiveness.  I know I have.  Depending on the level of relationship, the depth of the injury, or the amount of loss, I have struggled deeply for years on some fronts.

This one thing I have learned: forgiveness is key to healing in every way.  OK, so how do we get there?

Usually the reasons people struggle are due to wrong beliefs about forgiveness.  We don’t always understand it.  After all, how could I forgive deep betrayal?  Does that mean that now it somehow doesn’t matter?  It matters!  So help me out here, God!

What Forgiveness is Not:

Jesus makes it pretty plain that if we are not willing to forgive, He is unable to forgive us.  In Matthew 6:12 (AMP) He says, “Forgive us our sins as we also have forgiven (left, let go, have given up resentment against) those who have sinned against us.”

So these lists and scriptures have helped me, but with some people and some circumstances, it has taken me years to work through a process of forgiveness.  Just recently, the Lord asked me to give him a certain time period of my life as an offering.

There was a 3 year period from 2003-2006 when I lived in a travel trailer because of being manipulated out of my home.  With now 5 years between that time and the present, I’ve had lots of opportunity to work through what happened and how I felt about it.  Forgiveness was terribly hard for I lost much – everything I called home, my relationships with my children, my closest family and friends and more.

One thing I didn’t realize was that there was some left over pain and bitterness deep inside.  With a need for home being so dear to me, when I would think about it, the Lord would warn me not to complain.  About 2 weeks ago, the Lord asked me to offer this time to Him as an offering.  At first I could not see how this would in any way resemble an offering, right?  Because we give our best to God, right?  So what is this, Lord?  How is this something good to give You?  He asked again.  So I said to Him, “If you want these years I spent in that travel trailer as an offering, You can have it.  I offer it to You.”

Immediately I felt a piercing in my spirit and inside a moment, bitterness and pain started to be released, like it was leaking out of me.  That offering, that response of giving to Him 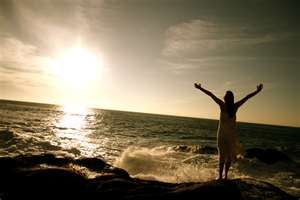 what He asked for, made it possible to be healed of such rancid stuff still held inside – that I didn’t know I was carrying around – that I have felt amazing healing come into me to replace what was still there.  This healing took place over several days and now my only emotion is of thanks and amazement!  What I was unaware of, God was certain of and could see the need and provide the solution.  I will not think of those days in the same way ever again – they have now become an offering, something beautiful because He asked for it and in His hands, all things become as new.  The enemy now has no hold on that time of my life because of God’s leading me to give it to Him.

What are you holding onto?  Where do you feel pain as you read this simple blog?  If you are not aware of any unforgiveness, would you be willing to ask the Lord to reveal it to you so that you might be healed as well? Take another look at the lists above and ask the Lord to help you make a forgiveness list.

And I’d love to hear your story.  In the telling of the story is much healing, so feel free to offer yours here.  Jesus and a friend will listen and He promises to help you through to healing.

When you are ready, you may use a prayer like this one to forgive those who have hurt you.  Don’t feel pressured if you are not ready.  Ask God and He will help you get there.

Thank you, Jesus, for dying that I might be forgiven.  By an act of my will I now choose to forgive those who have hurt me.  (Quietly speak out the names of those to be forgiven.)

I release each and every one of these people into the freedom of my forgiveness.  Father, I am trusting You for the healing I need.  In Jesus’ Name, Amen.